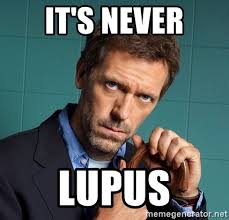 “It’s Never Lupus.” Tim and I used to watch House every week and laugh every time he brought up lupus. A disease that I knew nothing about and never cared to even google. It was the punchline of our favorite cranky tv doctor. It’s not so funny when the doctor tells you lupus is what you have. Here’s my journey to a diagnosis and what came after.

I’ll start by saying I’m very lucky. “You have lupus! What’s lucky about that?!” you may ask. Well, I’ll tell you. A lupus diagnosis takes years to diagnose in most people. And on top of that so many people I’ve met along the way have had to go through so many different doctors before someone even believed they were sick. I’m lucky in the sense that my diagnoses only took 6 months from my notice of weird symptoms to diagnoses. I was on vacation with our family and friends, enjoying the beach and the sun. We went back to our rooms where my lips and face started swelling. No explanation, just massive swelling. Oh well, I thought, no biggie, took some Bendryl, and thought all was fine. A few days later, same thing. At this point, I’m starting to worry that I’m developing a shellfish allergy. I don’t think much about it to be honest. Then about 3 weeks later, it was bad. No warning, my lip tripled in size, within minutes. It was scary.

Not my best look

At this point, I finally decided to call the doctor. Went in and they did some blood work and said all my allergy markers came back normal and that was that. When in September, 2 months later, it was still happening, I insisted on a referral to an allergist. I thank God everyday for this allergist. I went in for the appointment in October, and after discussions, the doctor said it didn’t sound like an allergy to him and wanted some more blood work done and we’d go from there. I immediately had a bad feeling. Something in my gut said I wasn’t going to like where this was going. I went for the blood draw that day and I swear they took at least 15 tubes; Lynie was worried they took it all, bless her heart. And then I waited. 2 weeks later, I got a blasé call from a nurse saying my ANA and Anti ds-DNA came back positive and that means autoimmune disease. She rattled off a list of common ones, said they we’re going to retest and if it was positive again, I’d be referred to a rheumatologist. Those came back positive as well and I was given a first available appointment in JANUARY. More waiting. In the meantime, I started googling everything on the list the nurse mentioned and the only thing that made sense was Lupus. And the more I read about it, the more I was convinced that’s what I had. Malar rash, check. Joint pain, check. Chronic Fatigue, check. On and on. I’ll tell you all my symptoms later but yea, it was shockingly relatable.

January 18th, 2018. I went in, super nervous but hopeful I was just being a hypochondriac (it’s been known to happen). The nicest nurse took vitals and asked about why I was there. Then she said “Has anyone mentioned Lupus? I’m gonna go ahead send you to get a urine sample to check your kidneys.” That’s when I knew it was coming. The doctor came in, did her thing, asked her questions and the conclusion was Lupus. Specifically, Systematic Lupus Erythematous (or SLE). Bless her heart, she tried to soften the blow and said “Its not too uncommon, Selena Gomez has lupus.” I do tend to look younger than I am, but that didn’t make me feel better. She went through lab results and set me up on a regimen. Plaquenil (which I’ll take for the rest of my life) and Prednisone to help until the Plaquenil kicked in. They set an appointment to come back in 3 months to check back in. Just like that, life changed.

Let me give a small explanation of SLE in case you don’t know what it is. Basically, my immune system attacks my own tissues and organs (instead of just the bad things) causing inflammation and damage. It can go after just about any of my organs — kidneys, heart, brain not to mention my joints, skin, and blood vessels. Sounds fun right? Did I mention there’s no cure?

So that’s how I got here. Let me tell you a little bit about here. **disclaimer : none of the following is for sympathy, I don’t need that or to complain. It’s to share what living with lupus for me actually is** I’m very lucky in the sense that my Lupus isn’t worse. It could be a lot worse; I know that and I’m grateful. But it ain’t easy. I am always in some form of pain. Some days are better than others and I can almost ignore it and be almost totally normal (for me), some days getting out of bed hurts too much. I never know what I’m gonna get until I wake up and try to get up. But there is always some sort of pain in my body and joints. This causes me to move slowly, become winded quickly, need to sit often, my fingers to lock up, and so much more. Speaking of fingers, lupus also brought along a companion; Raynaud’s. This causes my fingers and feet to constantly be cold and discolored, among other things. I get terrible headaches & migraines (I still am having this tested to get to the bottom of them). I’m extremely sensitive to the sun (that’s what was causing the lip swelling) so I always need sunscreen and extra sun protection. I’m pretty severely anemic (my body doesn’t absorb iron properly so it’s been difficult to try and fix) which also contributes the extreme fatigue that never goes away. I have the typical malar rash (butterfly rash) on my face which I can usually cover, thank you full coverage foundation. When I’m not wearing makeup, my face is very splotchy and red. Because I have to constantly take immunosuppressants (to calm my immune system down) I am constantly sick or getting an infection; UTIs are the most popular around here. My hair is thinning and falling out. Like, a lot. It’s bad y’all. I used to have decently thick hair. Now, I had to chop it all off because it was so thin and stringy. My weight has been all over the place. When they put me on prednisone, within 6 months, I gained almost 40 lbs. I had the typical steroid “chipmunk” face. And I hated myself. It was a really dark time for me. The steroids didn’t help enough for me to justify continuing to take them, so I stopped in July. I’ve lost most of that weight but am still struggling with some of it. The hair, weight, and this last thing I’m about to talk about have been the most difficult to deal with. I have a terrible memory now. They call it “brain fog” and it really does feel like I live in a fog. I can’t remember any new information. Things I’ve had for years and years are still there (I’ll still smoke you in Harry Potter and Friends trivia) but nothing new sticks. I can’t remember appointments, times, conversations, details. As someone who always prided myself on remembering the tiniest of things, it kills me that I can’t do that anymore. These are just a some of the things I deal with everyday. And it makes it even more difficult when everything on the outside looks fine. I do my hair and makeup, put on a cute outfit and you can’t tell that I’m sick on the inside. That’s why lupus is one of the “invisible diseases”. And it’s really hard to cope when you feel so bad on the inside and the outside looks fine. When I say I can’t come in or can’t attend, I feel the judgement and questioning. That’s why most times, I just power through and don’t mention it. You learn to smile and carry on.

I’ve been through 5 different sets of medications in one year. Recently, I started an injectable. And I have a feeling more things will need to be tweaked. That’s one thing I’m fairly certain about my future. Otherwise, it’s still up in the air. So far my organs are hanging on and I haven’t had them too affected and prayerfully things stay that way. But I don’t know. I’ve got several other issues that need to be addressed and tested for that I’m still dealing with and I don’t know what new challenges that’s going to bring.

Most days, I’m ok and my attitude is optimistic. Others, it’s not. It’s something I’m still learning to deal with. I’m really lucky to have such an amazing support system in Tim, the kids, my family and friends. I know a lot of lupus suffers aren’t as lucky as I have been so far but sometimes it’s harder to remember that. But I’ll keep going. I’ll keep fighting and trying. I’ll keep putting the smile on. This is what lupus is to me, what it means to my life. I haven’t ever really talked about it this openly, but I think, it’s time more awareness was raised. It’s time more people told their stories. Hopefully the stigma and confusion about lupus will start to go away and we can work towards a cure. We don’t know if we don’t try.

This site uses Akismet to reduce spam. Learn how your comment data is processed. 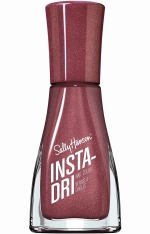